The United States is run by a right-wing white supremest and your state representatives have sold you out to bankers and lobbyists. Gang violence and murder are still prevalent throughout the poorer areas of the black community. Some areas of US cities look like war zones and the third world. Violence, in general, is rife throughout the whole country which begs the question, why? Lack of proper education, lack of proper healthcare and lack of proper transportation in every state for the poor. Because let’s face it, not everybody can afford an automobile. Here in Europe, we have a comprehensive transportation system in place. In small towns, you can’t make an underground system because that would be absurd so bus systems are put in place for everyone to get around without the need of a car. And the excuse it would cost Trillions to make an adequate transportation system in every state is bullshit! The US government spends billions every year on the military, on foreign aid for terrorist groups, on states who hate Americans but are happy to take the money out of the pocket of inner city kids who could use that money. The United States is the richest most powerful nation in human history but yet it is unable to provide free education, and universal income for every citizen. America has one of the worst records in the develop world for workers rights. In the United States an employer can fire you for no other reason than he/she isn’t fond of you. I ask you, where are the protest, sit-ins, and civil disobedience. Where is the rage, fire and pure madness needed from people to change the system for the better. I say, not to overthrow the entire system but to change it and make it better for future generations? This time in our history people have an abundance of information but nobody bothers to take the time to educate themselves. We have information coming in from all sides from people warning us about what the government is during to others and you but nobodies cares or bothers to mobilise. Every person who read and studied history and their rights in the 1960s were more intelligent than us. Back then, there was no internet but only libraries. All those freedom fighters gave their lives, went to jail/prison or went into exile from the government. All so, that you could let the government do what they want to you uninterrupted. Our grandparents fought and risked their lives so you could watch reality TV shows and wilfully forfeit your privacy to Facebook and the government. Martin Luther King Jr gave his life for the black community so you could all do nothing but let the police shoot you and harass you. The entire government should be on fire right now with protests in every city until things start to improve. The problems with America and Americans is that they all think on individuality instead of a collective. You will never achieve anything until you organise as a group and then you can begin to move mountains. The art of protest should be taught in schools, and the art of community organizing should be taught in schools. Americans need to learn how to stand as one on all issues of injustice. But they want, Americans are complacent with their lives in a glass house. I guess it’s better to live in a false illusion of freedom instead of living in a reality of tyranny, right? Yes, my fellow Americans, give yourselves a pat on the back for doing nothing. While other nations suffer because of our government and you because you decide to do nothing but going to Starbucks or the latest Drake concert is much easier, right? I, and people like me number in the few hundred thousands but what can you do when millions decide to do nothing or are to blind or scared to do something. I understand why my grandfather Fidel Castro took control of everyday life in Cuba because an ignorant population is more dangerous than a corrupt government.

I would like to thank you Mr. pig-police and your other two partners for interrupting my space and alone time at the airport. Apparently, Stuttgart airport police have a problem with black people sitting down and eating a fucking sandwich. Three hours to go before my flight back to Berlin so let me sit down and eat this fucking sandwich I just purchased. “Wow, this is a nice airport, I will definitely come back here.” I love how all three of you officers approached me with guns as I was terrorist. So you thought since I’m not in a monkey suit dress for white people’s approval you would harass me. Too bad you came up on the wrong nigga, huh? You thought all three of you could immediate me because you had guns and an automatic rifle, right? Wrong, you found out that this nigga wasn’t scared and in fact more intelligent than you. It’s ok, I was happy to verbally dismantle your argument piece by piece on why I “look like a suspect.” I was happy to catch you in a lie and have you stumble upon your own words thus embarrassing all of you. Since you three racist German police-pigs wanted my ID. It’s only right you give me yours too, Nazi, oops, I mean Mr. Policeman. Here is the photo of the racist piece of shit cop ID, you can see the coward hid his face. 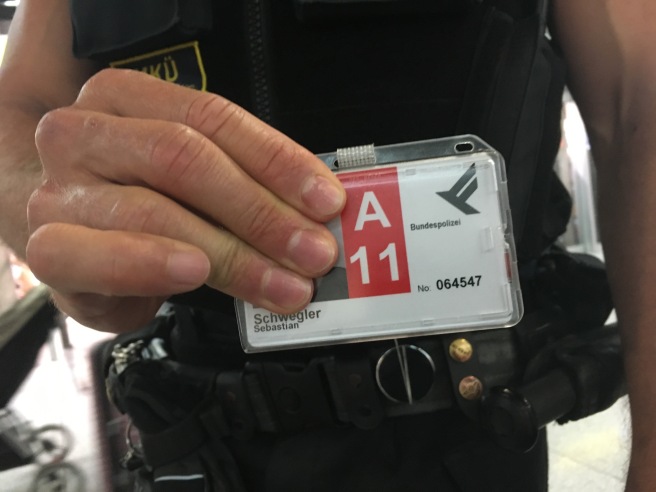 Give thanks to the White House Correspondents Dinner. The annual meeting of fake news journalist and criminal government officials. All colluding to trick and socially condition you into believing whatever comes out their corrupt mouths. All the journalist at that dinner makes me sick to my stomach. To become a journalist is to serve the people. To hold all people in power accountable for their immoral actions. These people are not journalists, they are provocateurs of chaos and deceit. CNN, MSNBC, Fox, and many more in the USA are all state-run news just with a mask of illusion on it. When the organizers of the event invited Michelle Wolf they never thought she would roast the hell out of the rulers of death and the agents of chaos. I’m a die-hard fan of people like Bill Burr, Patrice O’Neal, Sarah Silverman, George Carlin, Martin Lawrence, Bernie Mac, Wanda Sykes and many more. And now Michelle Wolf joins that list of legendary comedians, she is my new hero, it takes a lot of balls to go in front of all those safe-righteous snobs and tell the truth. She wasn’t nervous and she didn’t hesitate, she stood her ground like a true gangster and pointing the finger at all of them for their wrongs and hypocrisy.

Greek folklore tells the story of a hunter named Narcissus who exhibited great physical beauty. Narcissus was vain and arrogant and hated anybody who admired his beauty. One day, Narcissus was lured to a body of water by a Greek god because of the sin of  vanity. Narcissus didn’t realize that he was looking at himself but he fell in love with the image looking back at him. He was spellbound by this beautiful image, unable to eat, unable move, Narcissus lost the motivation to live and died near the pond that reflected his image. Official definition: Narcissism-excessive interest in or admiration of oneself and one’s physical appearance.

I will admit, I have been a little apprehensive about writing anything discouraging about Facebook. Like millions of people around the world, I too have a Facebook account with  family and to say the least…acquaintances as “Facebook friends.” Let me say, this article isn’t an attack on anyone who has a Facebook account but more of a critique.                        I remember when I open my account in December of 2014. After years of being subjected to mental abuse from everyone for not having one, I decided to throw away my privacy for vanity. I was amazed at how many people I got back in touch with, people I haven’t seen since my childhood or high school. In a way, Facebook is a wonderful tool to keep in touch with family or to connect with long-lost family members. But Facebook also has a disconnect from reality. People can choose to be whoever they want to be which isn’t healthy. You can present yourself as a person constantly traveling around the world or owning a boat even though it’s a rental. I remember growing up in the nineties as a teenager. Things were a lot easier and simple, human connections were simple and uncomplicated. Back then, a friend was someone who checked on you by calling or making a visit to your house and if you haven’t done those things then you can’t say you are any friend of mine. A while ago there was a physiological study done on frequent users of Facebook. The study found users were more likely to become compulsive Facebook addicts. Some people developed a psychological need to stay online. The official term is called “Facebook Addiction Disorder.” Here are some of the symptoms:

As you can see from the list above it is only a small sample of the symptoms. Depression, jealousy, envy and Facebook bullying are all part of the dark side of Facebook. When I first made an account I thought to myself. This medium isn’t being used to its full potential. As a journalist, as an activist, I thought why are people posting mundane things on their timelines. Facebook is the ultimate outlet for citizen journalism and for the people’s justice against oppression. For example, you have boss a who treats his employees like crap? out’em on Facebook. You have city councilmen stealing funds from the city? out’em on Facebook. Crooked civil servants/policemen just shot a citizen of the republic unlawfully? do you have video footage of it? out’em on Facebook. You got  greedy landlords who raises the rent and refuses to do any maintenance on the complex? out’em on Facebook. But once again, the false comforts of freedom allow people in the west to enjoy posting mundane things. Some people in Africa, Yemen, Libya, Syria, Afghanistan, and Palestine don’t have a choice. It’s good to know people have the choice of not having to talk about politics because it’s depressing and oh yes, “Facebook isn’t (Politics) for that.”

If you tremble with indignation at every injustice, then you are a comrade of mine. -Che Guevara